The Crystal Blaster is very unique in that because after flying for roughly about 0.75 seconds, its projectile will explode no matter what unless it is reflected. It also has increased damage, and a decreased reload, making it amazing for close-mid range combat. However, this makes it useless for long range. It is also useless for Roundcat Rally, because you will not be able to destroy anything.

Although the Crystal Blaster does an awesome job destroying Towers, it is used mainly for close-range combat. Because of its high splash damage, it can be used for a quick kill when needed. It can also be used for extra mobility, as it allows for midair rocket jumps.

Practically, the weapons only nerf is the -10% blast radius (which isn't much). The Limited range makes it explode mid air after a fixed time, making it easier to hit players with it's blast radius without aiming it at the ground. The very spammy, fast, and decent blast radius trait for the rocket added with this makes it incredibly easy to hit compared to other rockets in most situations. (rocket use in fights are normally mid to close range)

This rocket makes stalling easier and takes less skill to hit makes this rocket a formidable weapon to fight. This weapon is hated by many people and even is usually banned in tournaments

When the Crystal Blaster is recharging, all the crystals on it will turn dark. After finished recharging, all crystals will light up with the team's color on it, and create a short, melodic sound. 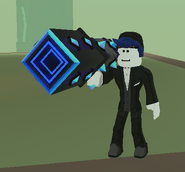