Super Doomspire Wiki
Register
Don't have an account?
Sign In
Advertisement
in: Swords, Legendary, Skins of Sword,
and 8 more

The Glowblade is a Legendary default Sword skin that costs 25,000 Crowns when buying it from the Shop. It deals 25 damage when swung, and its strike attack deals 45 damage. Its Special Attack is Lunge, which deals 35 damage. As for aesthetics, its blade is a gradient, with a darker hue of the player's team color fading into a brighter hue as it reaches the tip. It uses modified Lightsword sound effects when used. 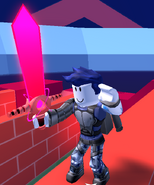 A Player on red team holding the Glowblade in Roundcat rally.