The lobby is a waiting area for visitors to buy weapons and/or stickers from the shops and wait. It is also a waiting room for where visitors go if they get eliminated, chose to go AFK, or if the round ends. It consists of a rejoining door, battle area, chests, tennis court and an high-up area, primarily for winners of the previous round. It is also called the spawn island as it can be seen from all the maps floating high up in the sky.

However, visitors cannot rejoin when there aren't any spawn points or only one team has spawns. 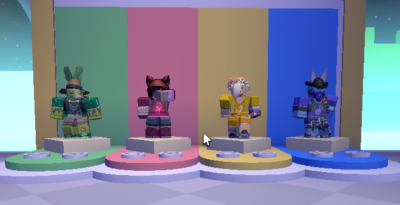 They have now been replaced by clothing racks across the lobby.

In the lobby, there is a cardboard cutout of a Shopkeeper that has a sticky note that says “AWAY -S”. It is behind a counter with many items behind it. Clicking on the icon with a shopping cart on it will bring you to a store. In this one you can buy accessories to put on your avatar, rather than tools and stickers.

Background is a feature that can change the background corresponding to the season it goes:

It changes the foliage and the floor's color.