The Shadow Blade is an Awesome sword that can be bought from the shop for 3,333 crowns. It is part of the Shadow Set

The Shadow Blade is a fast, combat-centered sword. It has a better reflect power and stronger lunge than the Basic Sword. However, it deals less damage on a swing or a midair swing, and has a slower special move recharge speed.

It’s special attack is Lunge, but it is different than other swords that utilize this. It is great with weapon combos because the Lunge travels further and faster that compensates its lower damage; but it recharges 50% slower (3 seconds vs 4.5 seconds) than a basic sword would.

Overall, this is a good sword! 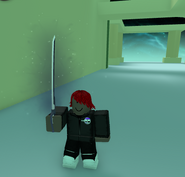 A player holding the Shadow Blade